WE ARE A FULLY WALK-IN CLINIC! THE ONLY SERVICES WE SCHEDULE FOR ARE SURGERIES AND DENTAL CLEANINGS! WE TAKE WALK-INS UP TO 1 HOUR PRIOR TO CLOSE. 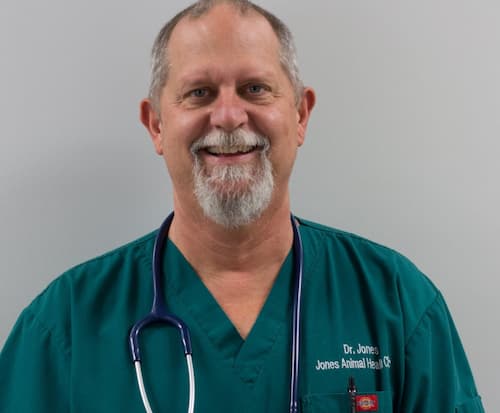 Dr. Jones graduated from the University of Missouri College of Veterinary Medicine in 1995 after serving four years in the US Army's Veterinary Corps. He opened Jones Animal Health Clinic in September of 1996 and moved to the current clinic in 2005. His favorite part of veterinary medicine is surgery.

Dr. Jones is married to Sharon and they have two children - Jensen and Trace, as well as one dog and one cat. He and Sharon also own Pawjama Party Kennels in Pevely. In his free time, he enjoys hunting. 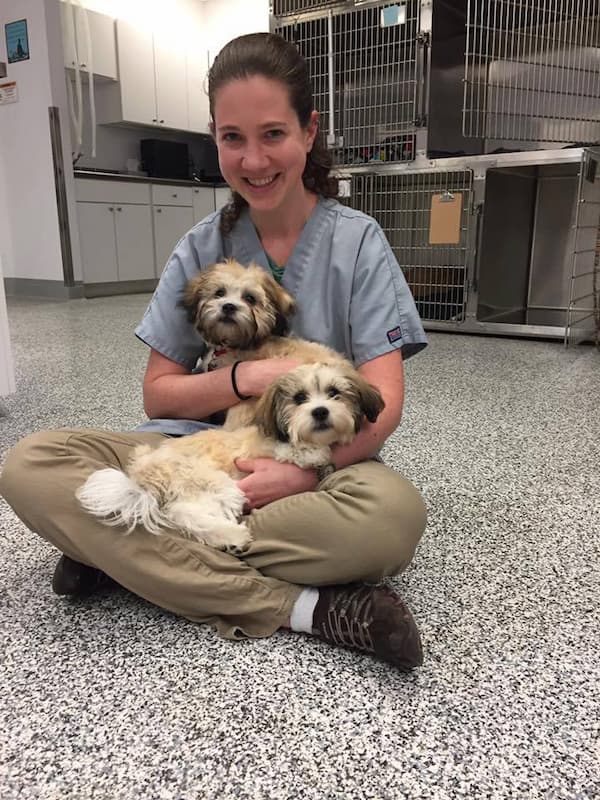 Dr. Langfitt graduated from Iowa State University with a BS in Animal Ecology in 2006 and a DVM is 2010.

Growing up in Iowa, Dr. Langfitt worked in a variety of animal and veterinary medicine related jobs, including working with fawns at the National Animal Disease Center, working at a Wildlife Rehab Center and a small animal ER Center.

After graduating from vet school, she moved to Missouri and started with JAHC in June 2010. When she is not working, she loves being outside walking, hiking, and biking. 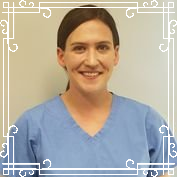 Dr. Kelly is a 2015 graduate of Mizzou's School of Veterinary Medicine. She grew up in Wildwood but is happy to be working in Crystal City. She has one cute kitty named Oscar. When she is not working, she loves reading, travelling and hanging out with friends and family. 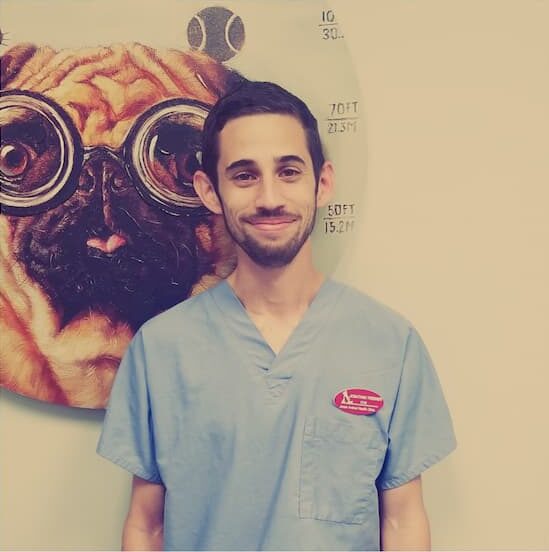 Dr. Tresner graduated from the University of California Davis with a BS in Animal Science in 2015 and received his DVM in 2019 from the University of Missouri. He enjoys spending time with his wife, Amanda, and their two dogs Tess and Lily. They also have one cat named Tatum and a tortoise named Toni. In his free time he enjoys hiking and watching movies. 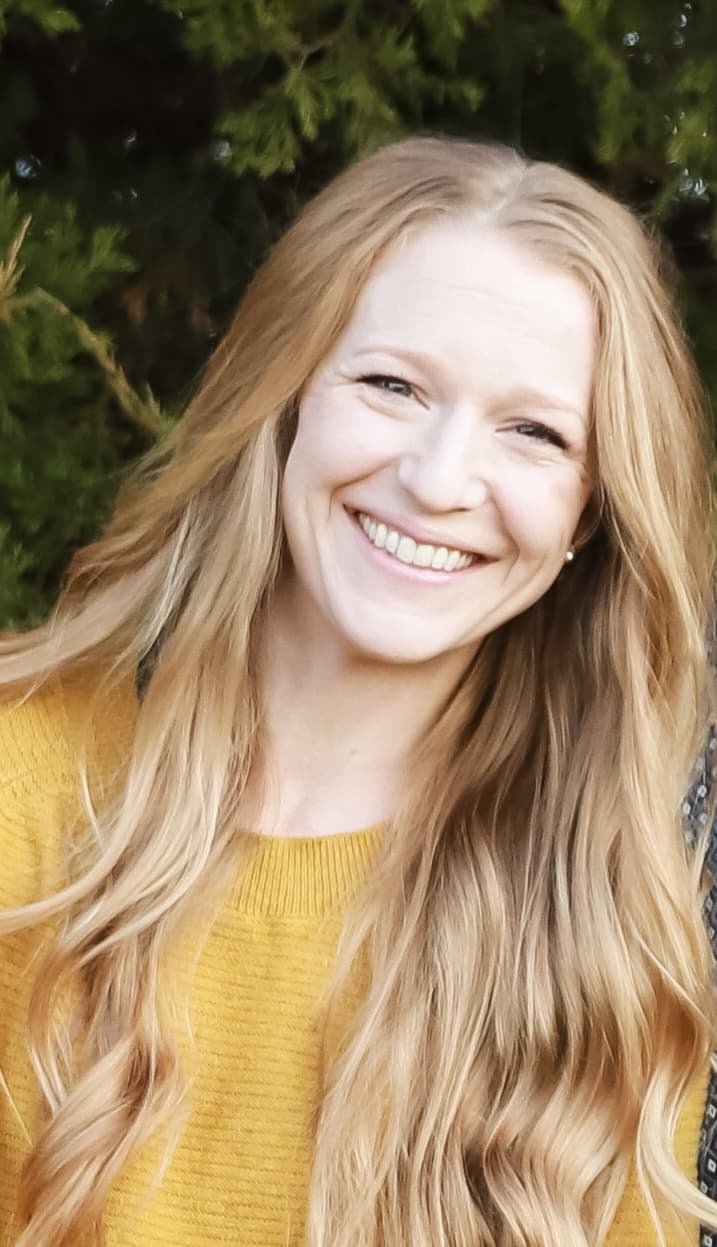 Dr. Hannah Gawf graduated from the University of Missouri-Columbia with a BS in Animal Science in 2012. She then continued at Mizzou to complete her Doctorate of Veterinary Medicine in 2016. After completing her schooling, she married her husband, Bobby, and moved to their farm outside of Bonne Terre, MO. There they reside with their 3 kids -- Boone, Stella and Hattie; one dog – Hank, one cat -- Cricket and their beef cattle herd. When she’s not working, she enjoys spending time with her kids, being outside on the farm, gardening, reading and baking. She joined the Jones team in 2021. 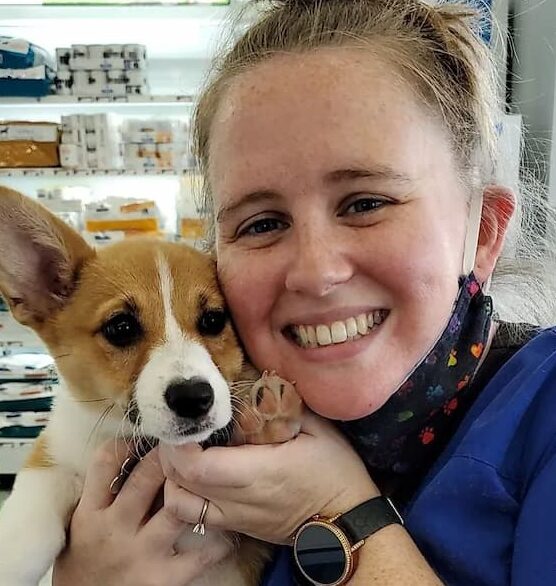 Marisa joined Jones Animal Health in July of 2016. She has three cats named Leah, Gimp, and Steve. Her and her husband love going to concerts, traveling, and spending time with family. Go Blues! 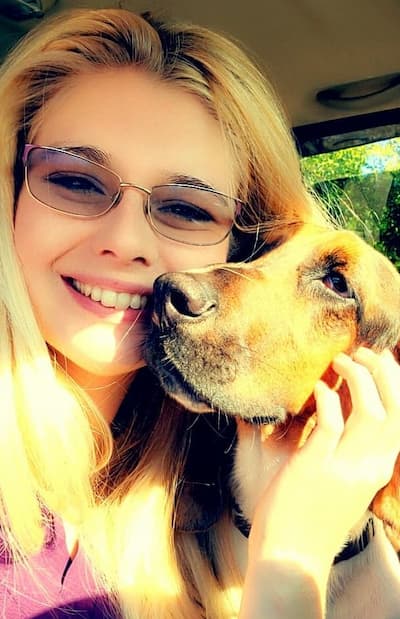 Morgan joined Jones Animal Health in May of 2018. She also graduated from the Veterinary Technician program in May of 2018. She has two dogs named Mack and Hank, two cats named Nalla and Kiara, and a turtle named Squi. She is married to Matt and has two sons named Dakota and Weston. She loves traveling with her family, reading, and spending time at the lake. 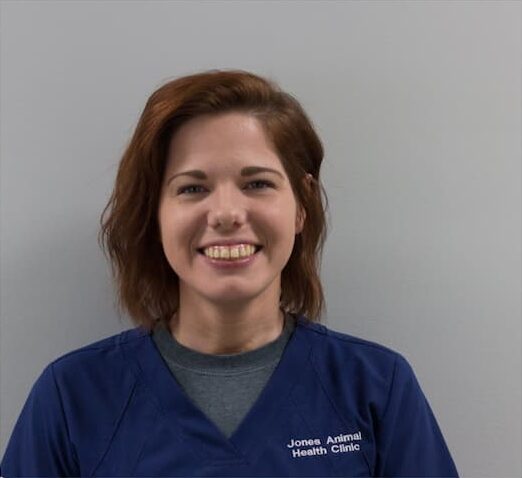 Rachael joined Jones Animal Health in November of 2017. She graduated from Midwest Institute with an Associate of Applied Science in Veterinary Technology. Along with working at JAHC, she also works part-time at Schnucks. She has two dogs named Zoey and Bella who she loves very much! 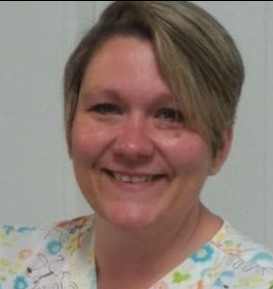 Stephanie joined Jones Animal Health in March of 2009. She has a Bachelor's degree from Missouri Baptist University. She enjoys watching movies and working around the house. She and her husband Roy have three children, Tristan, Shayne, and Delanie. They also have three cats, Ivee, Walker, and Oreo, and three dogs, Shelby, Ben, and Swayze. 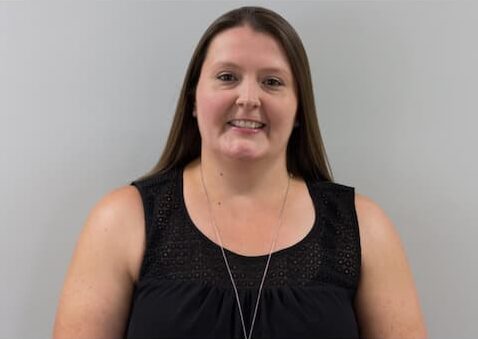 Shellie joined Jones Animal Health in 1999. She has her Associates in Applied Sciences from the Jefferson College Veterinary Technician program. Shellie is now part time with us and a part time stay at home mom with her son, Owen. In addition to Owen, she and her husband Chris have a Tibetan Spaniel named Rocky, a French Bulldog named Iggy, and a cat named Arceus. 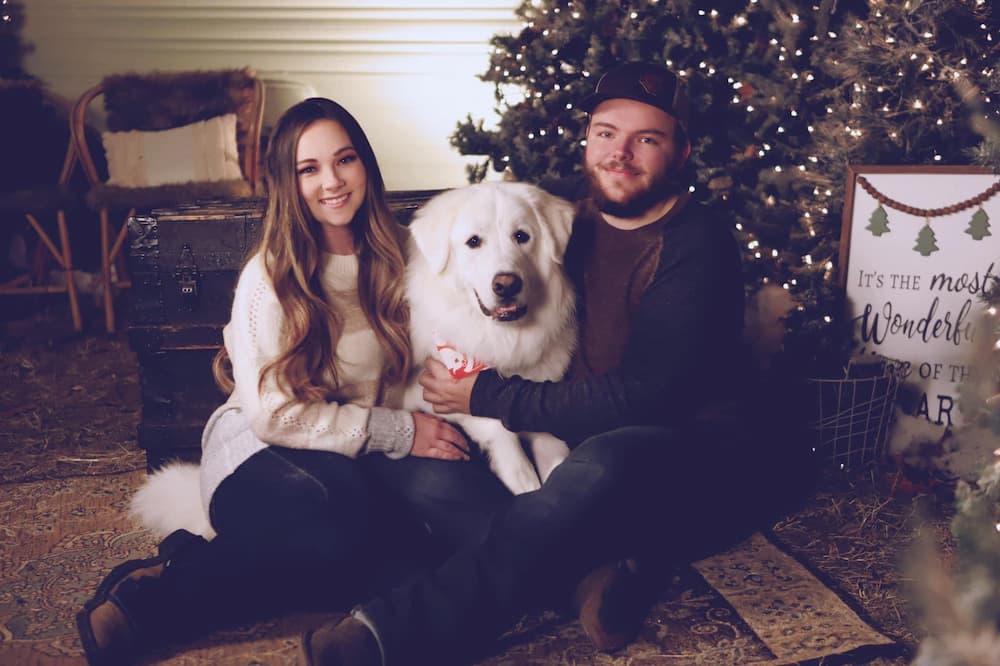 Courtney started working at Jones Animal Health Clinic in January of 2019. She graduated from the Jefferson College Veterinary Technology Program in May of 2022. In her freetime, she enjoys spending time with her fiance, Manny, and her great pyrenees, Riley. She also enjoys watching Netflix, going camping, boating, hiking, and reading. 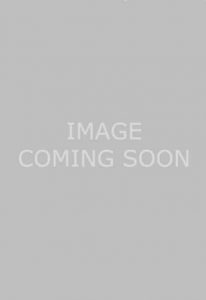 Bostyn joined Jones Animal Health Clinic in February of 2022. She is currently enrolled in Jefferson College’s Veterinary Technology Program with plans to graduate in 2023. Outside of work, she enjoys playing with her labrador retrievers, Piggy and Sammy. She loves spending time with her family and her 5 siblings. 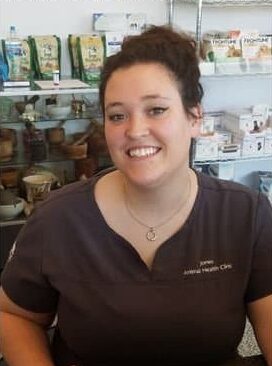 Emily joined Jones Animal Health in July of 2016. She graduated from Jefferson College with an Associate of Arts degree in May of 2014 with an interest in Zoology. In her spare time she likes to spend time with her husband Cody, her family, and her dog, Dunkin. She also enjoys traveling to Universal Studios and the beach, watching tv and movies, and going to the zoo. 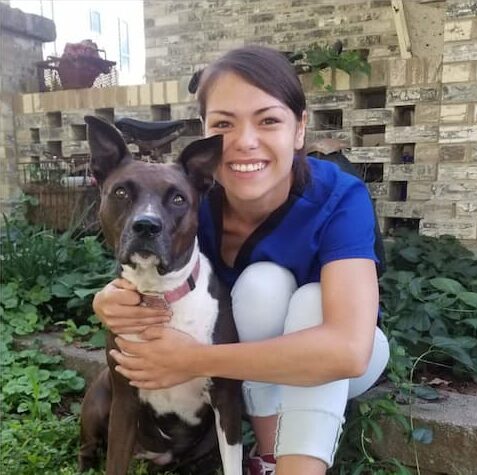 Kyndal joined Jones Animal Health Clinic in February of 2019. She loves spending time with her husband, Ryan, and her two fur-babies Harley and Ivy. She also enjoys being outside; hiking, fishing, and swimming. 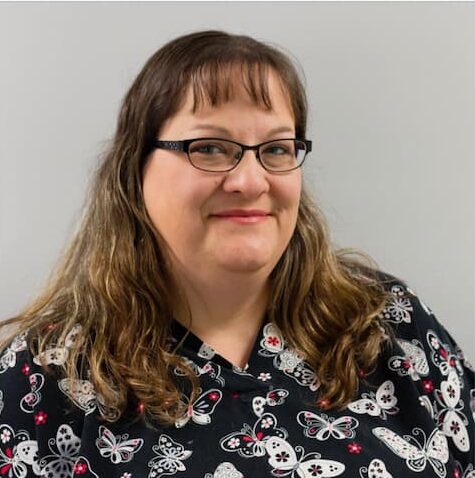 Teresa joined Jones Animal Health in 2005. She has been an Veterinary Assistant for over 20 years. In her off time, she enjoys reading, fishing, nature walks, and Cardinal’s baseball. She has a feisty cockatiel named Fiona and a silly pug named Libby. Teresa enjoys spending time with her family. 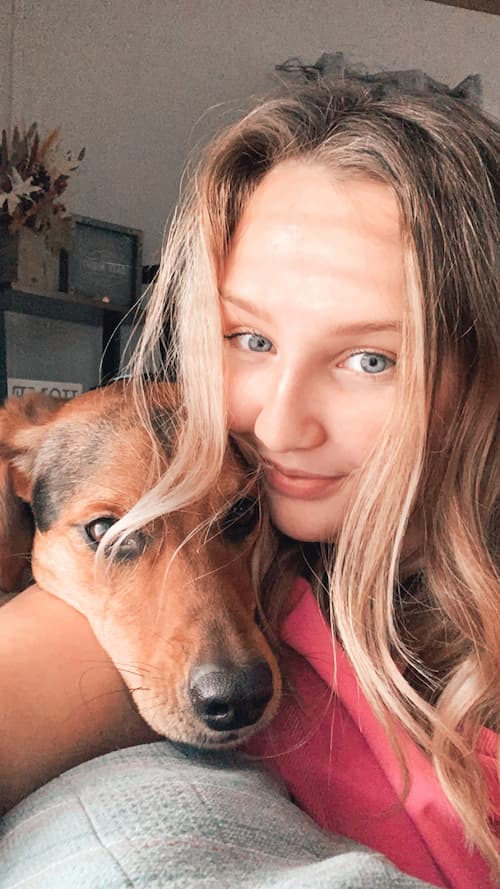 Madalyn joined our team in May of 2021. She enjoys spending time with her husband, Ryan, and her many four-legged babies. She has a cat named Max, two dogs named Sylvie and Sandy, and then three lizards! In her free time, she enjoys baking and spending time outdoors.